In 1949 the Special Roads Act was passed, giving Governmental go-ahead for the construction & Building of new trunk roads and begin building the first motorways, with the prospect of a 1000 mile system.

This was to be Britain’s second centrally funded system of a nationwide road network, the first having been constructed by the occupying Roman Empire.

It is unlikely the intervening 1,500 years just flew by, because given the state of roads in the country generally, travelling would have been a haphazard affair indeed.

The Romans developed techniques to build highly durable roads, taking in the need for swift drainage of precipitations, and building up layers of aggregates over a solid bed of crushed stone.

As a witness to durability, some Roman roads can still be seen today, even though parts of them have been constant use since being laid. The techniques that the Romans developed are not dissimilar to those used today.

The art of road building in Britain, it seems, went away with Romans, and didn’t reappear until the early nineteenth century, with two independent engineers developing their own ideas on road building.

Thomas Telford was an inspired engineer who pioneered infra-structure projects with boundless energy. His method of road building was not dissimilar to that of the Romans, understanding the needs for drainage and carrying capacities. He built around 1,000 miles of roads, and built over 1,200 bridges, including the suspension bridge over the Menai straits connecting Anglesey to the mainland.

John McAdam developed a technique of road building using less material than Telford’s, but grading the sizes of aggregate so that the weight of passing traffic compacted the stones to form a well drained and highly durable pavement.

His method proved the most economic and effective and became the standard build across many countries. The surface layer, when mixed with tar, became known as Tarmacadam.

In the post-war days of Britain, the drive to build began in earnest, in 1958 the first motorway was opened, the M6 Preston by-pass. Stretches of the M1 soon followed.

The basic format of road construction changed little, but the process became dramatically different. Gone were the big gangs of navvies with picks and shovels, replaced by enormous and powerful machinery for razing, digging, and material movements. 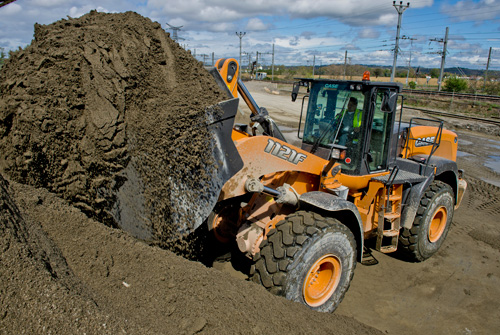 Surfaces can be laid bespoke to the exact requirements of every different mile of motorway, with every consideration to weight of traffic, friction required, and volume level controlled.